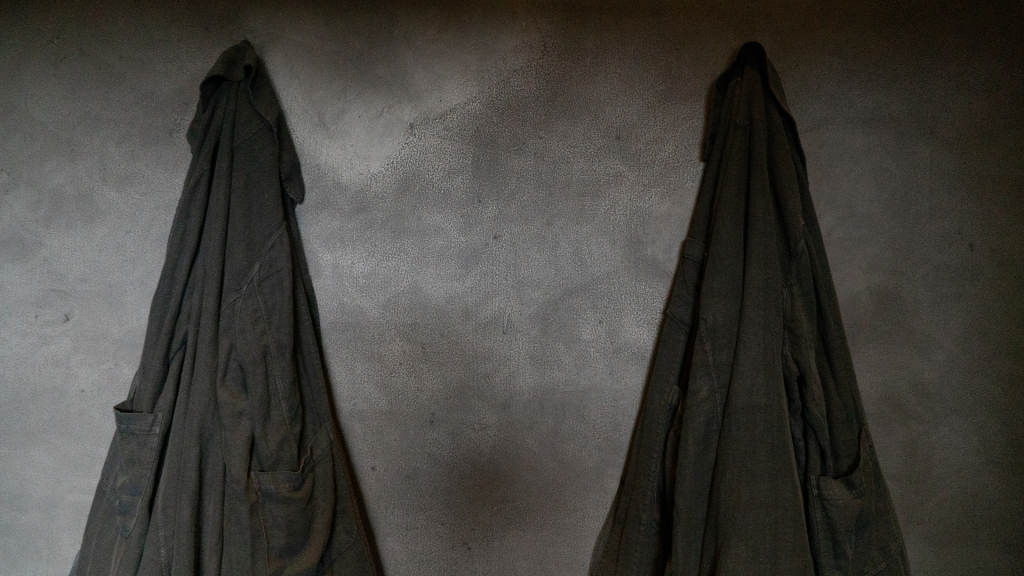 For centuries, it was believed that the end of the world was located in Galicia. With partially clouded skies throughout the year, wet, windy, cold winters, and nothing else but the ocean in sight, this place was named in Latin by the Romans as Finis Terrae, which translates to “the end of the earth.” Finisterre in Castilian and Fisterre in Galician is located in the Costa de la Muerte, a littoral that witnessed countless shipwrecks along its treacherous rocky coast.

This is the scenery that constitutes the idiosyncrasy of the Galician woman, but it is also the land that shelters, crosses, and embraces the woman in black that you see in the exhibition. 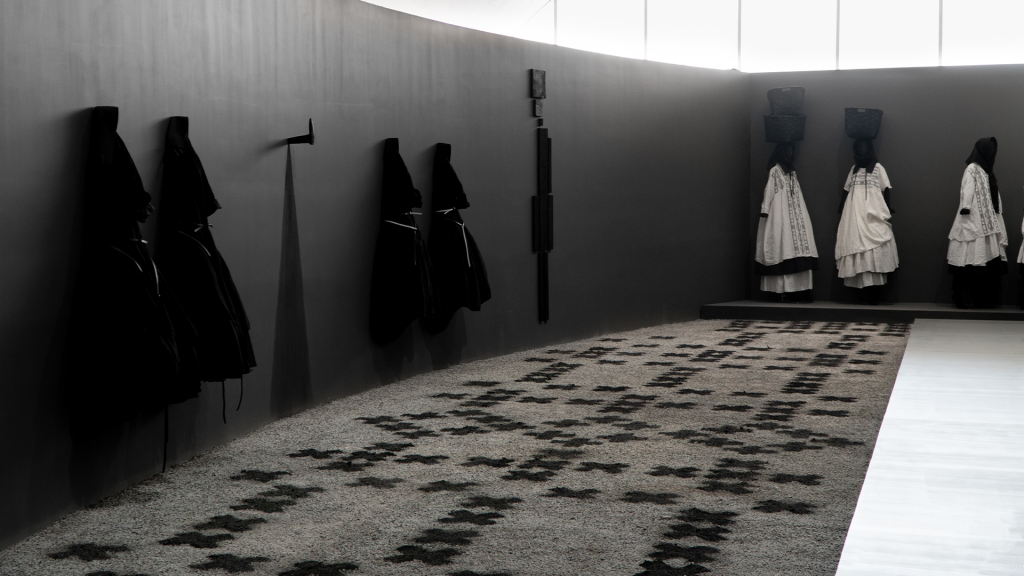 Galicia is a foggy, rain-soaked Spanish region trapped between Portugal and the Atlantic Ocean, with 1,500 kilometers of coast. Historically, tall granite hills isolated Galicia from the rest of the Iberian Peninsula, but the sea kept it open to the world. The character, culture, and architecture of Galicia are a product of this landscape that is private, cautious, and mysterious; but at the same time welcoming and accessible.

The most singular feature of the Galician coast is its rias, also known as estuaries. These geological formations can only be found in a few places on Earth, like Ireland, China, and France. A ria is formed by arms of the sea that enter into the land, creating a littoral sensitive to the ocean’s tides. In the rias, freshwater from rivers is mixed with the seawater, creating ever-changing levels of salinity that give an ashen look to the landscapes and the fishing towns.

The residents of the coast preserve pre-Christian sites, such as the Pedras de abalar, translated as oscillating stones, used as sacred spaces for several rituals. In addition, some beliefs are remembered in local culture, such as the legend that tells that the wind can create wild nightmares. 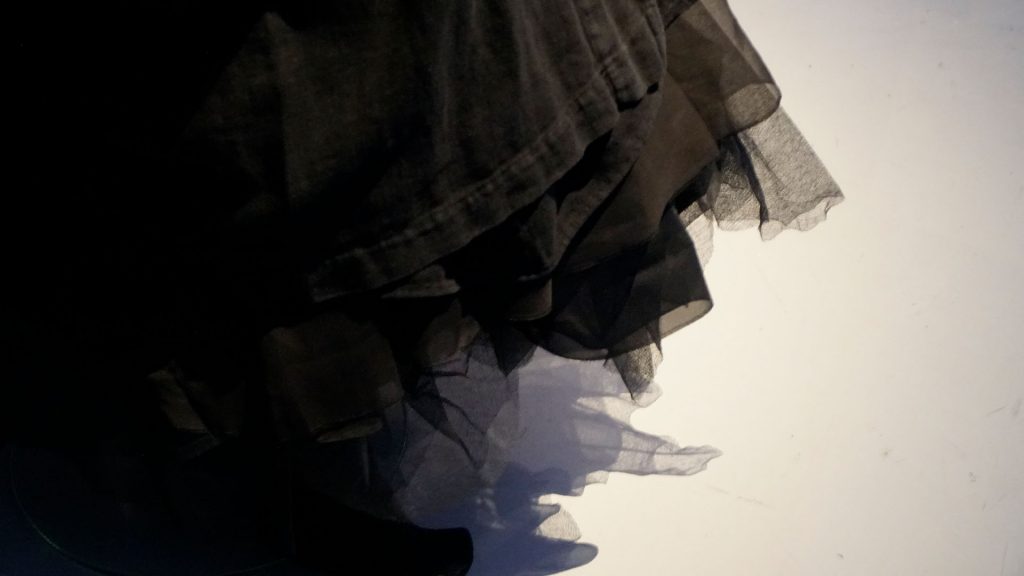 The exhibition is made up of costume pieces from the creative studio D-due, led by Charo Froján and Alfredo Olmedo. The garments were produced with linen in a small atelier funded in 1960 in a town located in Arosa, Galicia, close to the family shipyard and surrounded by the rural setting of the Atlantic coast.

Alluding to its artisanal production, the clothing, ceramics, and wood presented in the exhibition are displayed in duplicate to revalue manual work, distancing from the idea of uniqueness linked to Haute Couture and Fine Arts. 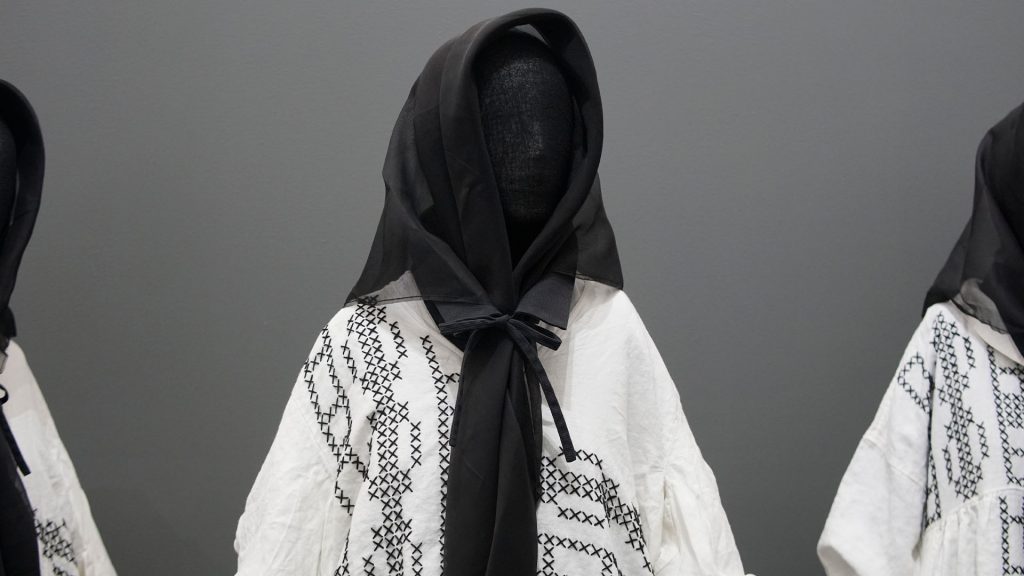 Knitting, spinning, sewing, and embroidery have been historically instructed tasks transmitted to women in the domestic sphere. The baskets, the cross-stitched embroidery, and the photo entitled Those who have seen death. Pilgrimage of the Holy Christ of the Agony, Xende taken in 1984 by Cristina García Rodero, invokes powerful images of the weight that physically and symbolically falls on Galician women. Unlike the men, they carry on their heads the load of the rural tasks carried out in the estuary, the burden of mourning and the construction of shared memory.