An Exhibition Curated by Dorothée Dupuis

The lush landscapes and ecosystems of our planet have always fascinated its inhabitants ―and its artists. Whether in order to control its fertility and resources or to protect themselves from its destructive powers, human beings have always represented nature as a protean deity, symbolized in many mythologies by animals, wise women, or other anthropomorphic entities. If different cultures have understood empirically the vulnerable aspects of nature ―hence its embodiment in the figures of graceful nymphs or other untamed beings―, its finite character, or even its potential extinction, has only more recently been acknowledged. Nevertheless, the scientific community agrees that nature itself will survive the extinction of the human species. Like a cyborg, every leaf, every plant, every organism has the ability to mutate, to change or reestablish its circuits in order to adapt to new circumstances. The concept of nature exists only in a dynamic relationship with that of culture, understood as the definition of human presence on earth, and of how human lifestyles in general, fueled by colonization and late capitalism, affect the environment and vice versa.

The synesthetic landscapes generated by the works that make up The Green Goddess seek to enter into dialogue about the drastic modifications undergone by the human, animal, and plant kingdoms over the last century, evoking our current technological relation to the environment, as well as to other systems of understanding it, such as those of the Indigenous peoples of the Americas. By placing under constant tension the idea of ruin ―not only the ruin of bygone cities and civilizations, but also the ruins of the ideals of modernity―, the exhibition makes reference to landscapes, imaginary gardens, mythical or historical representations of nature in relation to art, indigenous cosmologies, spirituality, technology, and science fiction. The artworks themselves ―like plant species in a botanical garden, architectural modules, or other kinds of figures― are intertwined in a deliberately apocalyptic congregation, rendered at once exotic and didactic, in order to bring out the ambiguities of the concepts of nature, authenticity, and exploitation.

Originally conceived for the festival lille3000, held in France in the spring of 2019, the initial idea of the exhibition The Green Goddess responded to the invitation of the festival organizers to rethink the notion of “El Dorado” from a contemporary standpoint. The name of this new edition at the Museo de Arte de Zapopan (MAZ), The Green Goddess Reloaded, is clearly an allusion to the second installment of the film saga The Matrix, and seeks to highlight references to both technology and pop culture in general, viewed as the indispensable framework of any visual arts production at the present time. The exhibition gathers the work of twenty-two Mexican and foreign artists, most of them emerging or in mid-career. In addition to the works exhibited in Lille, which have now been brought to Mexico, new invitations were extended to other artists. Thus, the exhibition at the MAZ can also be read as the group portrait of a certain generation of visual artists currently working in Mexico. 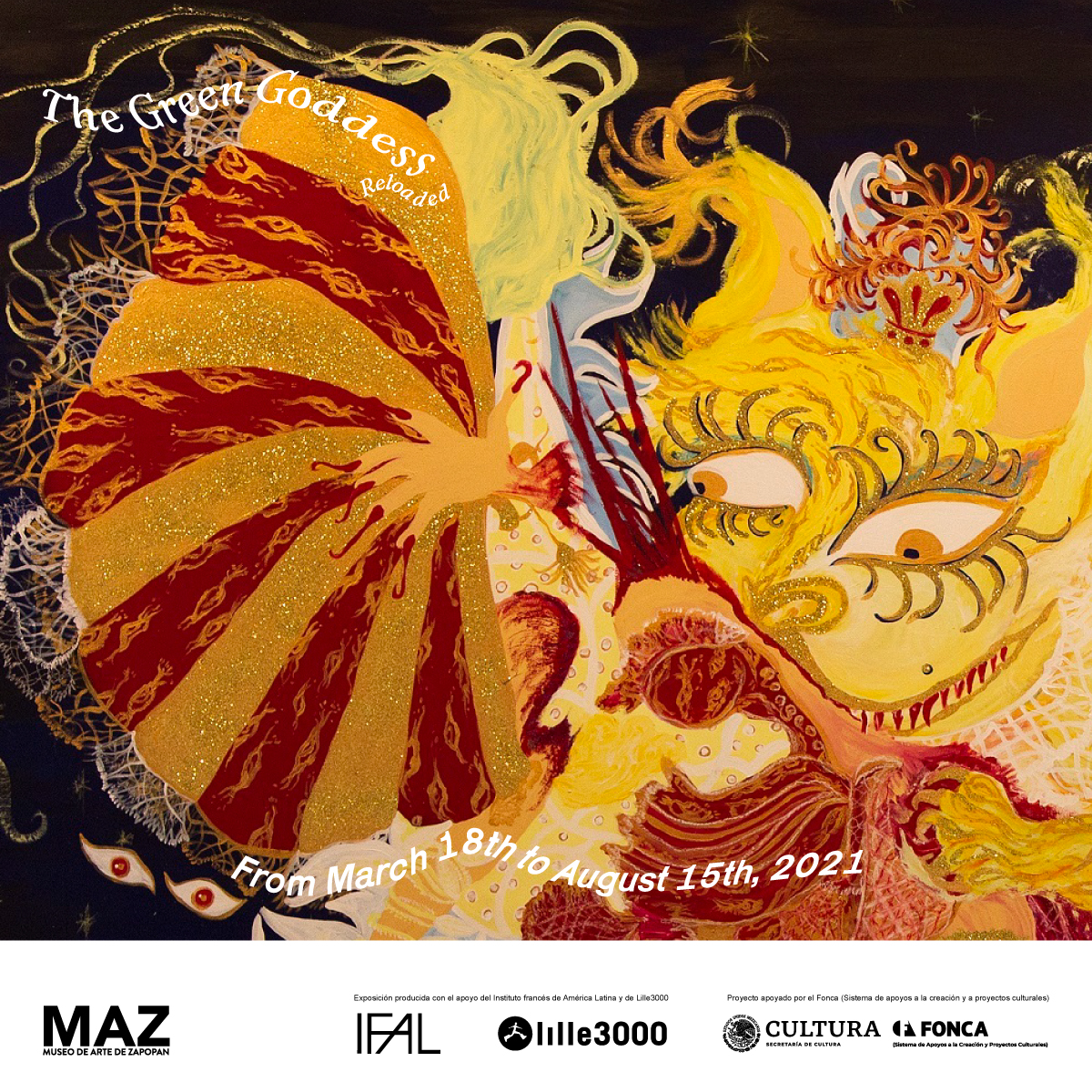