Today 70% of the poor in the world are women.

In social terms, gender inequality translates into a devaluation of the productive force of work performed by women. Low wages, unpaid work, and undervalued contributions are the reasons why there are more poor women than poor men in the world.

Before the Second World War, women’s occupations were limited to certain traditionally female fields, such as typing and sewing, and women were expected to abandon their work as soon as they had children or got married. Nevertheless, thanks to a rising demand for labor (owing to the displacement of men to war zones), women were welcomed in many areas of industry, medicine, and administration. One of the main problems faced by women was lack of access to childcare services during working hours. In the United States, in support of those bearing the dual responsibilities of working women and mothers, Eleanor Roosevelt promoted the first government-run daycare centers. Government-run daycare centers were also fostered in Great Britain to lend support to working mothers.

Following the Second World War, most women lost their newly acquired jobs, but this did not represent a backward step in the struggle to eradicate gender inequality, since year by year the percentage of women in the workforce increased considerably.

Economic gender inequality in Mexico is subject to a range of cultural dynamics that are reinforced by the lack of any effective public policy aimed at creating job opportunities for women in terms of quantity and quality. There is a need currently for the design and implementation of a national daycare system to facilitate greater participation by women in the workforce.

In spite of significant progress in education, the gender gap in terms of paid and unpaid work in Mexico is one of the largest of any OECD country. More than one-third of Mexican women between the ages of 15 and 29 neither study nor work, compared to one in ten men. Although it is growing slowly, the percentage of working women in Mexico is lower than that of other emerging economies. Many Mexican women face serious obstacles that prevent them from participating fully in the workplace. These include: the burden of unpaid work (Mexican women spend four more hours a day doing unpaid work than men do); traditional gender roles; and the lack of policy measures aimed at conciliating family life and participation in the workforce, including particularly insufficient daycare services and a lack flexible hours. “Taking Mexico to it maximum potential,” as the National Development Plan promises, will depend crucially on how the gender gap is closed in political, social, and economic life, and whether genuine social change takes place.

Historically, in the capitalist system, housework has been undervalued and rendered invisible, because it does not command a salary. Various feminist groups have wished to emphasize that such work is essential, fundamental, and not simply a personal service rendered to men and children. This claim has also had an important economic dimension, in the sense that many women are forced into dependent relationships with men because their own work is not remunerated. This circumstance is at the root of many power relations, as in cases, for example, of women unable to abandon abusive relationships owing to situations of economic dependence (Federici).

Ghada Amer offers material proof, by means of the phrase couched in enormous letters of red resin ―“Today 70% of the poor in the world are women”―, that women are the most marginalized group, even in developed countries. By introducing her work into the urban context, literally and symbolically, the artist claims her right, and the right of all women, to occupy the public space in a fully political dimension. 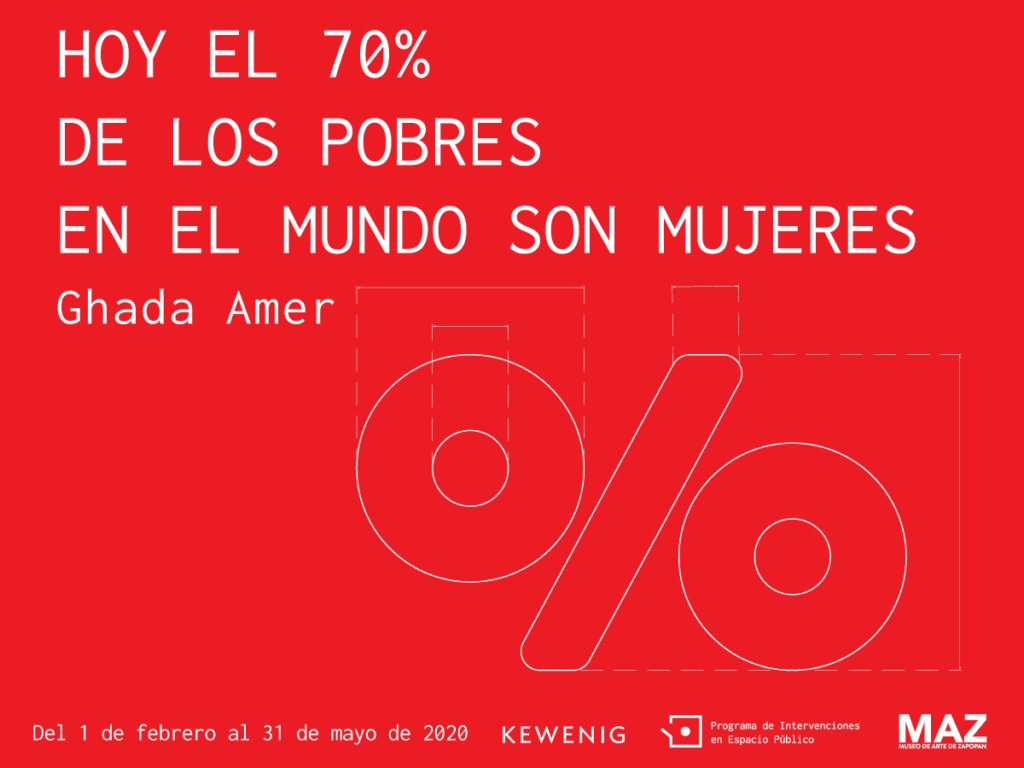